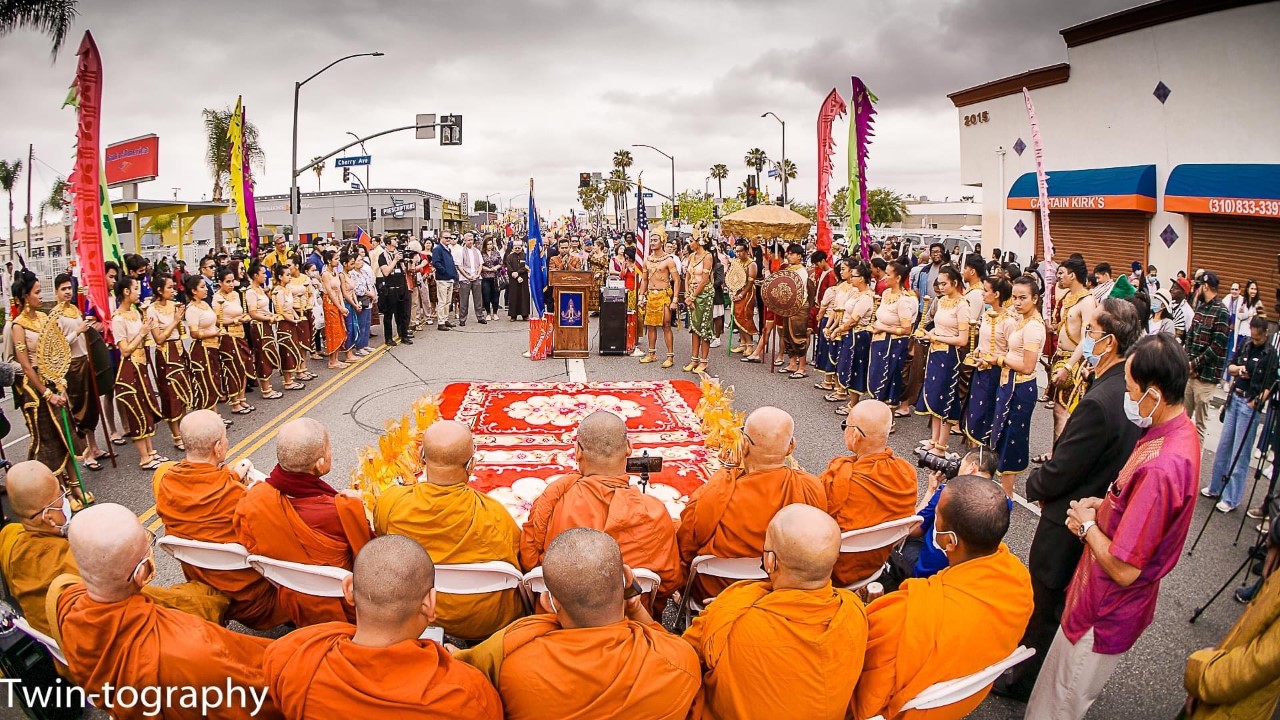 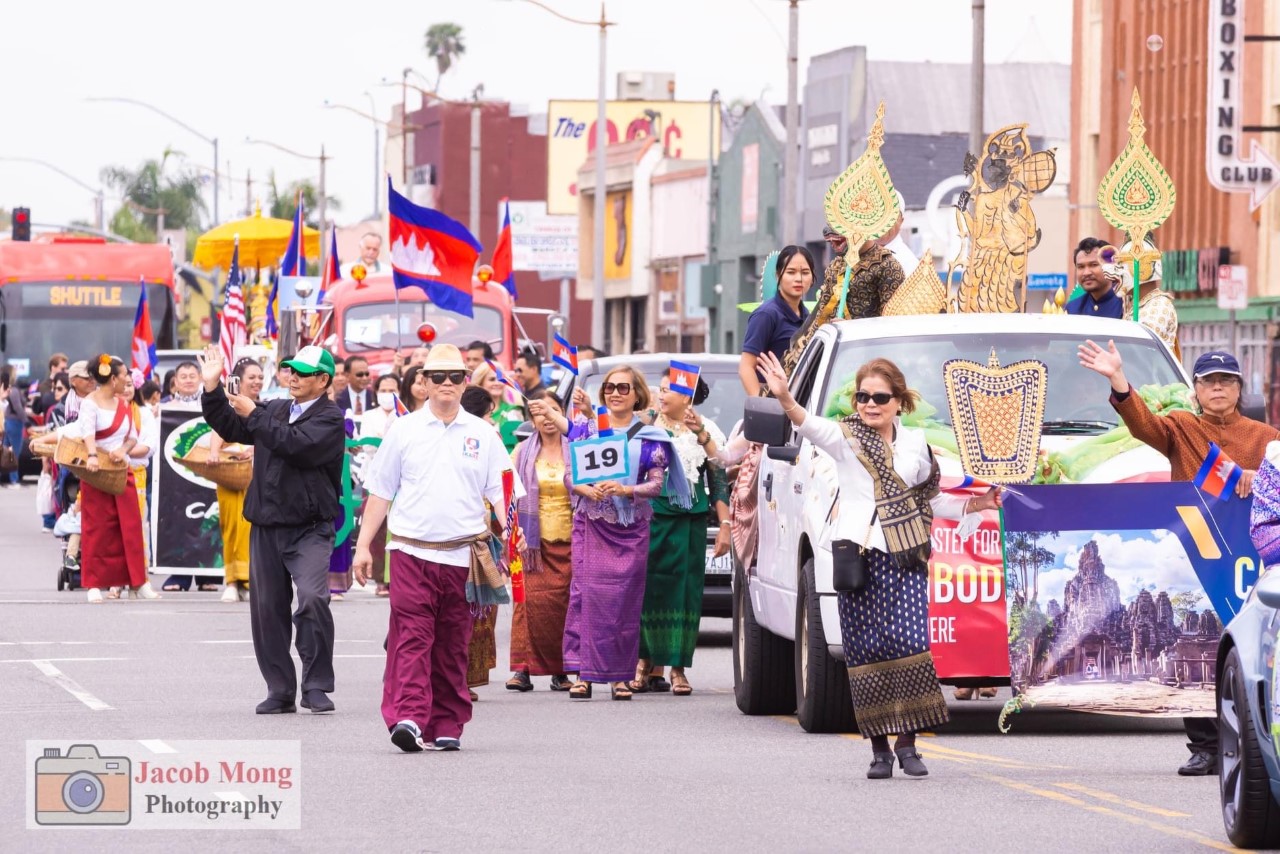 Since 2002, several attempts were made to garner the needed support for the Long Beach City Council to approve the Cambodia Town District proposal. As a result, the Cambodia Town Initiative Task Force (CTITF) and representatives from Cambodian based-organizations such as Cambodian-American Chamber of Commerce (CACC), Cambodian-Coordinating Councils (CamCC), and Phnom Penh Sister Cities (LBPPSC) started to look for other ways to accomplish this.

In 2004, Councilmember, Laura Richardson announced her candidacy to run for re-election.  She realized the importance of securing support from the Cambodian community and CTITF and other Cambodian based organizations recognized this as an opportunity to advance the Cambodia Town District proposal.  Many Cambodians announced their support for Ms. Richardson when she committed to the following:

CTITF and Cambodian based organizations developed the following objectives for the 2004 parade:
After election to her second term in 2005, Councilmember Richardson started working on her commitment to assist in the organization of the first Cambodian New Year Parade.  She chaired the first town hall meeting at the Community Center of Union Bank Branch on Atlantic Avenue to select the Parade Committee, parade theme, and date. “Don’t Forget the Past and Embrace the Future” was the theme for the first parade. Since Saturday, April 17th was the closest to the traditional 3-Day Khmer New Year celebration and did not conflict with any other major events, the committee unanimously agreed on this date.
A complication arose when some community members objected to the parade date because it was the same date that the Khmer Rouge took over Phnom Penh in 1975. They demanded another day be selected.  A few weeks later, the Parade Committee held a second town hall meeting to vote on a new date, but the result was the same date.
A third town hall was held at MacArthur Park when the opposition would not recognize the results of the prior town hall.  At the meeting, most of the attendees still voted for Saturday, April 17th.  One member of the Cambodian youth group stated that Pol Pot, leader of the genocidal Khmer Rouge, was laughing from his grave that April 17th was owned by him as a victorious day, and  no one can celebrate on April 17th.  Unfortunately, the result was not accepted by the opposing minority group, and they protested at the Long Beach City Council meeting which included testimony from the parade committee to explain their decision to keep the April 17th dates.
The Parade Committee reconvened to assess the situation at the Kirirom Jewelry Shop.  They decided it was important to maintain one of their key objectives -- to show unity in the Cambodian community. The Parade committee called for a fourth town hall meeting at MacArthur Park on February 22, 2005. Councilmember Richardson was present and she introduced Sithea San as the spokesperson for the parade.  Mrs. San reported that  in the spirit of unity, the Parade Committee agreed to change the parade date to Sunday, April 24th.  Mrs. San asked those present to volunteer to work on the parade with the committee and the first parade went forward.
APRIL 24, 2005 – THE FIRST CAMBODIAN NEW YEAR PARADE
The night before the parade, it rained through the night so that it seemed that the parade was doomed. But less than an hour before the start of the parade, the sky cleared, and the sun came out. People started showing up along Anaheim Street and soon thousands of adults and children were waving their Cambodian and American flags high in the air. They were so proud of both cultures. Many of them were moved to tears watching the Apsara dancers and pin peat musicians riding on the float down the street.  The success of the first parade and the reaction of the Cambodians inspired the group to continue producing the parade so that the next generation of Cambodian Americans could be proud of their culture.
In 2005 and 2006, the parade was coordinated by the Cambodian New Year Parade Association, then it was transferred to the Cambodian Coordinating Councils (CamCC).  They also hosted the Annual Cambodian New Year Celebration at El Dorado Park in Long Beach. CamCC ran both the Cambodian New Year Parade project and the El Dorado Park celebration from 2007 to 2019. Due to budget constraints and competition from celebrations by more Cambodian communities , CamCC decided to stop hosting the Annual Cambodian New Year project in 2019 and encouraged Cambodia Town (CT) to take over the parade project.  It was a natural progression for CT to take-over the parade since many of the board members were already heavily involved in the parade each year.
CT incorporated the parade project with their culture festival and in 2019 it became the Cambodia Town Parade and Culture Festival (CTPCF). In 2020 CT had selected the “Spirit of Apsara” with many aspects in production, but the pandemic hit and CT decided to hold the event virtually on September 27, 2020. To our surprise, the virtual festival reached thousands of viewers around the world. The second virtual April 24, 2021 CTPCF with the theme “Celebrating the Diversity of the Cambodian Civilization” also produced similar results of viewership around the globe.
On April 3, 2022, CT was finally permitted to celebrate the 14th Annual CTPCF in person. The parade and festival attracted several thousand spectators and participants from the diverse communities in Los Angeles and Orange counties.  Through social media, it  reached approximately 5 million plus viewers throughout the United States and Cambodia.
CT depends on the generosity of sponsors, donors and the City of Long Beach to provide the CTPCF each year.  It is a labor of love by scores of volunteers that educates people about the richness and uniqueness of Khmer traditions.  It is one of the largest community events in Long Beach and brings multi-cultural participants who share their music, dance, and joy.
Toggle the Widgetbar